The Great 'What if'

Alright! I'm stoked. This post is going to follow a slightly different structure so pay attention. Today I won't be rambling on about what creative writing means to me. Oh no, today is group participation day! That's right!

First, take a good look at this: 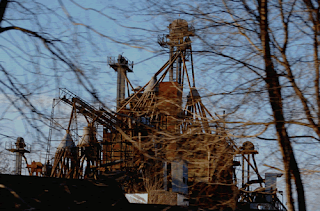 So, what do we have here? It's just a picture. Okay, okay it's some trees with a building. Yep, some kind of processing plant. It could be for gravel or sand or wheat or potatoes (I'm leaning more toward sand and gravel)... it doesn't matter. Just look at the picture. Do you see anything interesting? (No, it's not one of those cool pictures where you cross your eyes and a whale spits at you...)

Alright, I admit it, this is actually my Summer home. There's a nice lake out back and I fish for 3-eyed trout and let my toes soak in the radioactive ooze. No, not really, but EXACTLY!!!! If you're stuck and you have the ol' thinker constipation going on, this is the perfect trick! If you're in the writing mood, great! Pick the first thought that comes to your mind and start writing. If not, hold on a bit, we'll get there.

("I bet a lot of men work there, it'd be dirty work. But what if the employees were all women? What if this isn't really an industrial plant at all? What if it's an elaborate cover for miles and miles of secret underground tunnels where a colony of fugitive women are hiding, fighting for their survival? Why would they be hiding?")

("What if a young man joins the Army and goes to war, during an intense mortar exchange he's injured and later sent home on a medical discharge. No longer able to pursue his dreams due to his new physical deformity, he takes a job as a night janitor at the old gravel refinery. What if the foreman for the ground crew is none other than his old school rival, no longer able to escape the events of his past the young man must now face the same bullies he'd tried to leave behind.")

("Ten years ago those trees had been planted by the neighborhood watch. They were meant to deter crime in what was considered the 'bad part of town'. After a year they all just died, leaving the street scarred by their shadowy, skeletal fingers.")

("A twig snapped as the detective stared intently at the crime scene before him. "Coffee?" She asked. Her eyes were piercing in the dark. She'd been his partner for six months now, damn good one at that, but if there was one person Detective John Delane didn't want sneaking up on him in the middle of the night, it was her.")

These are all different approaches for using the picture as a writing prompt. Notice the last one didn't mention the trees or the building at all. It's just something that popped out. Don't focus so hard on the picture that you lose the image that flitters across your mind. None of those starts are even that good, but you know what, they don't have to be! The point is to write and to keep writing. You are excavating an idea that you can later mold and shape, but you have to uncover it first.

Now, what if you really aren't in the mood to write something serious? You have the block and it's giving you a headache "this big!" Well, we have some options! We do? Of course we do! If you don't feel like writing a poem about global warming, what about a fake ad copy? The sillier the better!

("Here at Henderson's Dirt we pride ourselves in providing the best soil around. In fact, not only do we love it, but the worms do too! They're so delicious and nutritious that we just couldn't keep them secret any longer! So the next time you're at the store, pick up a box of Earthworm O's! Your kids'll love you for it!")

The point is that if you're writing something just to be silly you won't be concerned about it being good or not, or at least you shouldn't be. The trick is to make simple writing exercises like these fun for you. If you're in the mood to write serious, do it! If you look at a picture and you're suddenly struck by a memory that seems completely unrelated, go for the memory. Every now and then you'll find you uncover a lot more than you expected when you follow those random tangents.

So take out a notebook or open up your word processing program and get to work. You've got a writing exercise to do! Get that creativity flowing! Now if you'll excuse me, I've got a nice hot bowl of Nightcrawler Noodles waiting at the table.
Posted by Unknown at 10:35 PM

Wow Dude, your brain is all over the place.

As a photographer, my first thought was simply the realization that I wanted to mentally push aside the trees limbs in the foreground to clearly see the picture... Sorry it wasn't more interesting, but damn, you had everything else covered.

Interesting thoguht process though, I'll be back to read your ramblings.

I had identical thoughts to you up to the part about the all female workers, then my mind took a somewhat different tangent. :)

Only joking, hey, this is a really good site if that post is typical of your writing. I will certainly be back.

Thanks guys! Great to hear! I'm glad you liked this post. I've got a Nikon D40 that I've been taking a lot of my newer pictures with. Right now I'm just a baboon with a camera, but when I get some of these writing projects finished I'm going to learn more about it's finer features. I took this picture while hanging out of the passenger side window going about 45 miles an hour. I did a little editing on it to darken it up a bit and blur out a little of the detail. :)

... "going to learn about its finer features."

Sometimes my fingers just get away from me.

I see you're just like me when it comes to making a grammatical error - to correct or not to correct; it is a dilemma.
That "it's/its" one slips in there sometimes even though I do know which is which.

When i saw this Photograph i thought pirate ship instantly, captin hook style. ?