I posted a lengthy comment over at David King's blog this morning and figured I would take a moment and post it here on my blog as well. If you haven't visited David's blog, Pics and Poems, I highly encourage you to take a few minutes to do so.

Many years ago, perhaps before I married my wife, I had a very memorable dream that I was at a park. Of course, as in many dreams, the park was a bit different than it was in real life but I understood in my subconscious that it was one and the same. Much as the case in reality, the park had a long walking path and at the end there was a bridge over the river the path had followed, from there reality and dream diverged from one another. Instead of the baseball diamond being to the right of the bridge, it was located on the other side. To get to it I climbed through a gap in the chainlink fence that appeared to have been made by bolt cutters. That is where the dream started getting interesting, and it had nothing to do with baseball...

I had long forgotten the dream in the years that followed, perhaps ten or more but it's hard to place a date on it. It's like grasping at a dream that you want to hang on to as you begin to wake up and regain a foothold in the conscious realm.

Last night we went to that park for the first time in a very long time, probably since as late as 2001. We threw down a blanket and ate dinner, the children ran off to play on the jungle gym, and soon enough I was left to fend for myself, my wife had taken the kids to feed the ducks while I had a bit of quiet time. The memory of the dream remained buried.

Time trickled away and I looked up from my Mother Earth News magazine and glanced at my watch. I slowly gathered the trash and threw it away in the bin and then packed up. I dropped our stuff off at the van and set out on the path to find my wife and kids.

At nearly the halfway point of the expansive trail I caught sight of them and jumped the fence to hide in the bushes, hoping some rogue goose wouldn't decide to creep up on me instead. As my two oldest came into view between the gaps in the foliage, I jumped out! "Yaaaarrrrghhhhhhh!!!!" I roared.

My oldest, Becca, cowered in fright, Gryphon jumped in alarm.

Having had my fun, I turned them around and we headed back the way they came, to the end of the trail. We wound our way to the end of the line and I was surprised to find the fountain that had always splashed and gurgled in my youth was dry. Something in the back of my mind began to itch.

A bit further up the trail was the familiar bridge that had escaped my memory. I passed it without second thought and the itch became stronger. Following the sidewalk instead, we veered right.

"You can't go that way, Dad." Becca told me. I shook it off and rounded the bend. There in front of me, cutting across the sidewalk that had been forever unobstructed was a chain link fence.

At that moment I felt akin to reaching the pinnacle of a roller coaster ride, in that speck of time that feels slower than reality. And then with a whoosh it all came flooding back. Like a father jumping out at his children from the bushes, it was alarming, but there was nothing to be afraid of...

I couldn't help but wonder if the fence ran around to the other side of the bridge as well... and if it did, had someone cut an opening with bolt cutters? A stray thought crept into the back of my mind. If there was a fence and there was no hole, was I supposed to cut it?

I left the thought unanswered, turned around, and sped down the hill, pushing the stroller and yelling, "Vroooooooom!" as we passed the bridge again.

The rest of my thoughts on the matter were drowned out by September's giggles as the stroller bounced on the tiny cracks in the sidewalk.

So, what happened on the other side of the chain link fence in the dream so many years ago? I can't say. It's not like I was sworn to secrecy or anything... It just wouldn't feel right to tell. I hope you enjoyed the journey, the end is up to you. 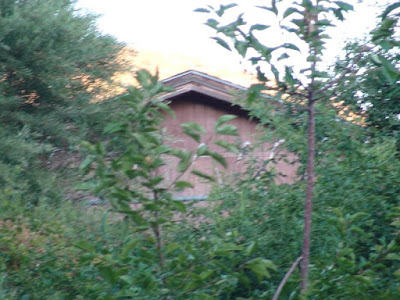 Email ThisBlogThis!Share to TwitterShare to FacebookShare to Pinterest
Labels: Dreams

That was a fun yet somehow sorrowful dream. I wonder what the significance of the dry water fountain, and the fence were. I know in reality I have gone to places from my youth and been dismayed at what I found. That was a nice story though, and thanks for sharing it.

Thanks Eric, I appreciate your insight. It's always surprising to me how comfortable I can be in dreams where a location translates differently in my subconscious than it is in real life.
Whenever I have dreams that I go back and visit my old Junior High, the school is always the same, and it's much different than it is in reality. But somehow in my mind they are the same...