Alas, the weekend has come and gone. While I was unable to enjoy every single hour without interruption from work, I did begrudgingly begin my shift this morning with a feeling of satisfaction for the time I had with my family and my writing.

Saturday began with a trip to the Davis County Fair. You must understand, of course, that this fair always has been, and I suspect may be for quite some time, the bastard-child of fairs everywhere. It's almost a complete joke and this year was no exception. The kids did enjoy their time at the petting zoo, though, so it wasn't a complete waste. 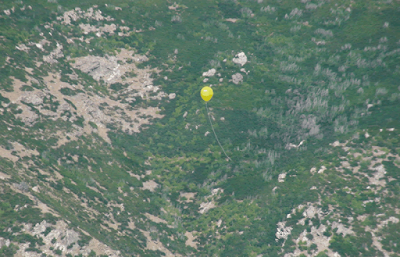 After we made our hasty retreat from the grounds, we headed to Barnes & Noble to kill some time. The sun was out in force and it was far too hot for the adventure we had in store.

While in Barnes & Noble, I bought my wife a knitting book she's had her eye on and I picked up a magazine on Renewable Energy; it had some pretty decent articles for home use of Solar and Wind generated power. I found it quite an enjoyable read and decided to hold onto a copy of my own. I also swung by the Starbucks, conveniently located next to the periodicals, and purchased a Mint Mocha Chip. The gal put extra whipped cream on it, much to my delight. (Thank you!) It felt good to cool off with a nice cold drink. 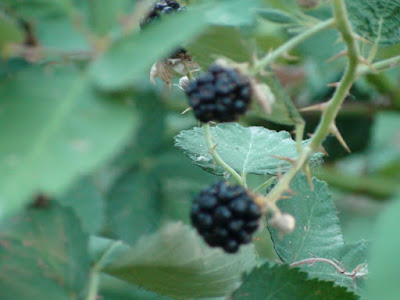 From there we stopped by a grocery store about 15 miles away and picked up a 1 gallon pitcher, then headed up the road a bit to our super-secret (no-so-secret) blackberry picking spot. It didn't take long to fill that container all the way full, the berries were large and delicious! It was easy to tell that we hadn't been the first pickers to the spot, as most of the easy pickings were long gone. That left us to brave the thorns and brambles in search of the berries that had been just outside convenient grasp to earlier visitors. Even so, we had a great time!

After our berry fun we drove up the canyon and ate at a quaint riverside restaurant called "The Oaks." Dusk was fast approaching though, so we missed out on visits by hummingbirds, but the evening was still quite enjoyable. The sound of the water splashing and gurgling as it made its own epic journey was quite relaxing and really quenched the creative thirst.

Sunday night I took my laptop outside to the swing in my "writer's nook" and worked on a crazy little project I dreamed up over the weekend. (Henceforth referred to as "Project Daisy" ... yeah, yeah, I know...) It was a decent start, but the project has a low priority and I resolved to finish my SF short story by the end of the month, even if I have to do so by force. I will continue to work on Daisy though. Over time I plan to string bits and pieces of the storyline together. I won't really go into detail, just let me say that if I ever do seek publication for it... you better believe it will have a pen name! Haha!

So that was my weekend. How was yours?
Posted by Unknown at 4:29 PM

Oh, that video was so adorable! I loved your littlest daughter with all the blackberry stains around her mouth. LOL. Reminds me of my boy.

And, good luck on project Daisy. I'm so jealous. I wish I had a laptop and a cool writer's nook. :)

The point is that you write so much more than I do! A laptop and a nook mean nothing if you aren't writing! Though I will admit, I did well today, I got about three pages (double spaced) on my SF short story. I wasn't sure about how it was coming out at first and was tempted to scrap my efforts and try again, but it's really starting to come together now.

Project Daisy will be taking a back-burner to my official writing, but I think it will be a nice diversion when I'm afraid of my own writing. It happens, I get these expectations that everything has to be so perfect on the first go and I choke. Project Daisy will allow me to jump off to something else and write with a voice that isn't my own. Hopefully that will be enough to keep me writing so that I can be more comfortable with what I create.

(I must tell you, you're my current envy! Keep pumping out those books! You inspire me!)