I just need one of those good, old fashioned breaks where I can kick my feet up and relax. I realized the other day that I have been more sick this year and have taken far longer to recover from each episode than any other year to date. I'm pretty sure that has a lot to do with stress. I've actually been eating better in the past few months and haven't been staying up as late as I normally would have in the past. I've even been making an effort to drink more water.

I've made an appointment to see the doctor this afternoon to take a look at this cough that's been around for almost two weeks now. I figured it would be a good idea once I started seeing a fair amount of blood when I blew my nose, despite my learned distrust of the majority in the medical profession after my time in the military... If blood were any indicator of emergency, which I doubt in this case, then I was right to make the appointment since I ended up getting two full-blown bloody noses last night.

The good news is that we have a vacation coming up soon. A real one. We're going on a cruise! I'm pretty excited, but it's getting close enough that I'm getting a little nervous too. There are so many things to plan and to remember to bring. We booked this vacation months and months ago but the closer it gets, the more I worry about whether or not we are forgetting something.

It turns out that I hit the jackpot! I've got bronchitis, a sinus infection, and inflammation of the throat. This won me the fabulous prize of antibiotics and cough syrup from the pharmacy! Yay! Wait a second... that doesn't sound like a prize at all! As my kids would say, "What the buttmunch!?" (No, I don't know if it's supposed to mean anything, and I simply do not ask... the mental picture is enough for me.)

I have also talked to my supervisor and he has agreed to allow me to take a 30 day leave of absence. At this point I think that if I had continued to push myself under these conditions I would have eventually puttered out and would have thrown in the towel altogether. At least this way I can lean on my savings and take a much needed rest so I can better handle the stress that can build up with this job. It just doesn't makes sense to fight mental stress while your body is under siege, probably due to a weaker immune system caused by all the stress. What a vicious cycle!

So, I hope to rest a bit over the next few days and then turn towards writing as a way to filter off more of the tension that has built up over these past few months. I won't expect anything great, what ever comes will come and that will be just fine.

Thank you all for stopping in to visit me from time to time. I really do appreciate each and every one of you! 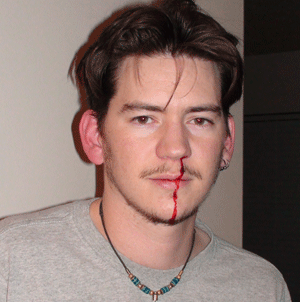 That must be uncomfortable. You, indeed, need a break. Enjoy your vacation and we'll be waiting for your great "comeback" short story.

All the best and get well soon.