Are Creative Endeavors a Product of Pain?

During my mid-teen years, arguably some of the hardest in my life, I was prone to expressing myself through creative means. I made up little ditties such as The Poppy Seed Muffin Song on the spot, a brainchild of improvisation. Of course, this song, and many others like it that I have long forgot, made me an instant hit with a lot of the girls my age and, unsurprisingly, instilled some resentment with some of the more physically expressive guys looking for their share of attention. The truth of the matter was that my antics were a product of the pain I felt inside and an effort to bridge the gap that I felt between myself and the rest of the world. The outcome, however, was quite unfortunate: I found that despite all of my efforts, I only seemed to amass a large amount of fair-weather-friends. These friends were happy to have me around, just so long as I didn't allow my pain to show through the grand charade. Always being quite intuitive, I picked up on this fact early on, but couldn't help but play along... some contact, however shallow and trivial, was better than none at all. Making people laugh made me happy.

The writing I did during this earlier period was mostly just letters and notes. The majority of my time was spent reading. How could I not? On most days my life consisted of going to school, coming home, and spending the rest of the night hidden away in my room except for phone calls and dinner. My only friends after school were my animals. To be lounging around the house during those years was dangerous for me. I couldn't just head off to my friend's houses, we lived out away from the subdivisions and I was often denied my requests for parole - though my siblings had an easier time of it. My mother felt that she was losing her relationship with my father, and he blamed me for destroying their marriage. No, I wasn't an only child, I was just the only one that they didn't really get along with. It's a long story, and one I don't feel like delving into for this post.

It is no real surprise, then, that I took so readily to writing as a form of expression. My poems and short stories were a hit, yet here too I encountered resentment. Even though my stories and poems were the hit of my Creative Writing and Advanced Creative Writing classes, I was turned down for publication in the school literary journal during both my sophomore and junior years in high school. I'm not sure if I finally made it during my senior year or not, but the rejection cut quite deep at the time. In each case, one of the Creative Writing teachers told me that they had really tried to convince the student committee in charge of selecting the pieces for publication that my submission belonged, and both years the outcome was the same. Apparently being on the committee was a sure-fire way to get your work in the publication, and though I did consider joining for that sole purpose, I just couldn't stand the idea that my writing had been published for that reason alone.

I can't imagine that all writers are hurting, or have a history of pain in their lives, though I am sure there are a fair number with their own demons to bear. Whether the majority of writing is the product of pain or just a form of expression that some people are drawn to, I can't say. Perhaps for me it was more an avenue of escape; one that was replaced with overt responsibility when I joined the military, and washed over with the countless hours I spent playing video games to ease the burden of a choice I made to give my wife and my little girl a better life. After all those years I want that avenue back, not so much to escape anything, but because I feel like it is a part of me that I have denied for too long.

How about you? Whether you write, paint, knit, sculpt, or carve: why do you feel compelled to create? 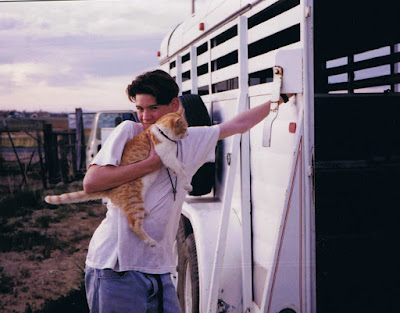 Why is it so much easier to stand in front of a portrait of a writer you admire than to look in the mirror? We all do it. And we keep doing it convinced that if we just look in the face of the next portrait down the line we'll see ourselves? I've never found anyone out there who writes like me and if I did I'd likely quit and let him get on with it. No point in the two of us eating ourselves up over a few lines of poetry.

Since you're clearly interested and I know that opening answer won't satisfy you I'd have to say that my best work always arises from . . . let's just call it 'extreme negative emotions' because 'pain' doesn't really cut it. But let's just talk about raw pain for the moment and you're lucky because the past four days I've been sick as a dog. I've had a pain on the right side of my head that neither ibuprofen, paracetamol or codeine would relieve and that lasted for two days followed by a fever. Anyway, in the midst of all that pain I wrote a poem. Surely only a poet would try and find relief from pain in words. Of course for me this poem will only ever be about that hemicranial headache but you might see something else in it.


Pain is the opposite of hunger,

hunger, will swallow it whole, but
it won't work the other way round.

It can with different kinds of pain.


Now I think I might see if I can rework that opening paragraph into a poem. It seems too good to waste. What was the source there? Pain? Too right. Years and years of it. You don't need to be in pain, remembered pain works every bit as well, sometimes even better because you can apply a bit of creative distance to it.

After working and struggling with a writing project I begin to resent it, and then to hate it, and can't wait to finish and be done with it. I've never understood that: why do I continue to do something that upsets me so?

I grow more verbose with emotional stress. It's therapeutic to try to decipher my pain through words. Although, I don't take the pain and then sit down to write incredible fiction, like you. I just try to write what exactly I'M feeling, in narrative or sometimes poetry. (Which is probably only useful to me, not anyone else who reads it). When happy, I just want to be in the moment, and rarely feel compelled to capture it in words. At least, not in as MANY words. So my answer is yes. I've been wondering if this isn't rather unfortunate. I'm sure most readers would rather read about things inspired by the good, rather than the bad.

But not all creative endeavors (at least for me) are a product of pain. I only sew or cook or redecorate when I'm emotionally content.

I think some of the greatest works of art whether it be writing, painting, music or otherwise is derived of deep sorrow. I know myself as a writer, though compelled to write and create on a daily basis, my best work was born from sorrowful situations. Look at Poe, he was a tortured soul all his life yet his work is unmatched. I think it is different for every artist out there but what I do know for sure is that if it's in your soul, there's no way around it and you have to create.

My loneliness as a teen is directly responsible for my writing. Keeping a journal gave me someone to talk to about the books I was reading along with my feelings. I read and wrote pretty much all of my waking hours from 13 to 17. Poems and journaling were my two biggest outlets, with a few short stories tossed in. Now I blog and dash off a poem from time to time. I must admit, I have trouble getting my muse's attention when everything is going well.