The Invasion of Dorian Gray

As I sat down to my computer this morning, with coffee in hand, the name Dorian Gray popped into my head. How very odd, I thought. I really have no idea how it got there. I most certainly haven't read the book, The Picture of Dorian Gray by Oscar Wilde, and if I ever saw a movie of it, it could only have been one of the old black and white's at my grandmother's house when I was quite young.

Of course, that led to a 45 minute foray into Wikipedia to figure out who this Dorian Gray person was which spilled into a life history of Oscar Wilde. 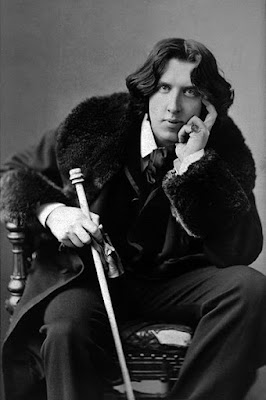 What a journey down the rabbit hole that was. I must say, I do not envy Oscar Wilde the life he lived. Dorian Gray was the only book that Wilde published, though he was a renowned poet and playwright of the Victorian era. Even still, his life seemed embroiled in conflict, the summary of which left me wondering how it felt to look back on those events before passing. It is not a life I would have chosen, though I don't bear the burden that a homosexual man from the Victorian era would have bore. Being heterosexual, I find myself mourning the pain his wife must have felt. How would it be to marry a man only to find out that he enjoyed the company of other men, so much so that he would end up forfeiting his relationships with his children. Was it noble of her to continue sending him money to fuel his life of debauchery as he made his slow and painful descent toward death? What agony the two must have shared together...

Now I find myself wondering... why this today? Where could I have possibly picked it up? Apparently I must have missed the film that came out this year. In my quest to find a connection this morning, I watched a trailer on IMDB.com but it was the first time I'd seen it. Trailer Here - it seems as though the movie came out in September.

We went and saw the new Christmas Carol movie last night, in 3d nonetheless. And here the plot thickens. Colin Firth played a part in both films. How very strange. Yet, still, it doesn't explain such an odd occurrence. In fact, I may never know why the name popped into my head as it did. As for now, there seems to be no rhyme or reason.
Posted by Unknown at 9:24 AM

I bloody love Dorian Grey. His life reminds me much of my own. Loving your blog.

i believe you choose your religion and that is your choice.

do you think you were born as a hetero male or did you made a choice? did you make a choice to have dark hair, or good teeth?

please enlighten me as to when you consciously picked your straight path, or good teeth for that matter.

i am not even going to discuss the burdens of his wife and wilde being born a homo, as it would be too difficult a challenge to discuss with you.

Bigots come in all flavors, Jason. I never claimed that Wilde chose his sexuality, nor did I bring up the nature vs nurture debate. I simply claimed that I can only imagine that there was a lot of pain between Wilde and his wife.

This was a woman who married a man who had already had encounters with other men and who lost him to that lifestyle. Yet, somehow she found it in her heart to continue supporting him with her money. Sounds a bit backwards, doesn't it, being as she was raising the kids and all.

You can try to make this into a straight versus gay argument all you want to, but it just isn't going to fly here. Being a writer means that you often have a keen understanding of pain, but also that you aren't blinded by it. Take the blindfold off and see the relationship for what it was: a union of heartbreak and scandal - and yet somehow love, of one kind or another, bound the two.

The world is a bigger and more interesting place than what you paint it out to be, Jason. I suggest you broaden your understanding and let go of some of that pain you're harboring.

Personally the original 1945 movie A Picture of Dorian Gray is one of my all-time fave movies. I must have seen it 30 or 40 times. It's one of the most eerie films ever made. The atmospheric photography and Hurd Hatfield's acting are immense. I haven't seen the latest movie and probably won't, I was disappointed that they didn't choose Stuart Townsend who played a version of Dorian Gray in The Extraordinary League of Gentlemen in 2003. As far as the comments on homosexuality, I think it fair to balance the argument by pointing out an enlightened society has the choice to empower or chastise, I choose freedom for the individual over religious dogma every time. The truth is that it is the false notion of 'respectability' that caused so much pain for both Oscar Wilde and his family than any notion of sexuality. He most likely genuinely loved his family dearly, however much of the sufferance is due to the corrupt legal and social system of the time. I.E if Oscar Wilde had been born now he would have never married a woman for the sake of appearances... although I reiterate on a platonic level, from his diaries it is obvious he was most definitely a loving father and husband...

Thank you for chiming in, Paul. That is exactly what I meant when I referred to the burden of a homosexual man living in the Victorian era.

Wilde's flamboyant and witty criticism made him very popular in his day, but also garnished a fair amount of bitterness from the wrong type of people. He ended up spending two years of his life imprisoned for his homosexuality and later moved away from his native Ireland.

It should also be noted that it is believed that Wilde converted to Catholicism on his deathbed. Since religion was brought into the commentary. I, myself, am not catholic. But to be fair, since it was insinuated that my supposed mindset stems from my roots in Utah, I am not Mormon either. Nor have I lived my entire life in Utah.

I have since re-watched The League of Extraordinary Gentlemen, and the depiction of Gray was very interesting, though the premise that looking at the painting could be his undoing was a bit off.

If you would like to read a snippet of the book by Wilde online, you can do so here.