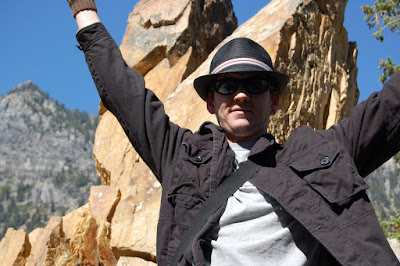 Well, it's been a rough journey so far and I'm only eleven days in to this year's NaNoWriMo. I took a day off after a particularly long day at work and I've been trying to catch up ever since. The lesson was hard learned and I have since concluded that it is better to get something, anything, down rather than throwing in the towel for the day.

This event has also taught me a lot about who I am as a writer. My rough draft efforts are not as rough as they could be, and I often struggle with not going back to edit. Instead, I've found that by keeping a notepad near at hand, I can write down my ideas as I go along. This is particularly helpful for filling in the parts I've already written with tidbits that I've decided to include later on and saves me the trouble of going back to adjust the writing. Which would be bad with my tendency to self edit.

For example, I realized in chapter 3 that my character would have bled to death if he hadn't staunched the bleeding from the wound in his left arm back in chapter 2. The solution was simple, I wrote as if he had quickly bandaged himself and included the details in my notebook for the upcoming rewrite. It isn't just good for the minor details, I've also been able to write down notes concerning major plot points that suddenly popped into my head. Making that earlier reference is as simple as putting it down on paper and plowing forward.

Even still, my word count has been slow. I have entirely avoided flowery exposition and witty description. My chapters all hover around 4,000 words and the world is still an empty canvas. On one hand, I think it reads easier and all the content so far has been about propelling the story forward. On the other hand, the writing lacks metaphors and similes and any sort of charm. But I'm willing to deal with that, I guess.

Somewhere along the line I had to make a choice. Either November was going to be NaNoWriMo and getting to 50,000 words, regardless of where it took me in the storyline, or it was going to be about my novel. While I am still participating in NaNo, and my goal for the event is the standard 50,000 words, I actually want to have the skeleton of my book complete. And that really just boils down to moving the story forward. It's harder to get the word count, that's for sure, but I believe this is much more in the spirit of what my rough drafts will be like in the future.

It's interesting, too, just how much comes to you while you're writing. I used to think that I needed to fully expand every idea before I sat down to write, but the story has really formed around my characters and themes have interwoven with the ideas I had for my second and third books in the series. Case in point, last night my characters were discussing a particular item and what it might mean. Out of nowhere I uncovered a backstory that totally opened up the possibility of a prequel and added a lot more depth to a minor plot point. An old war suddenly had a bit more meaning, the players of the war were defined, and the realization of how it all came together rippled out through the entire structure of the storyline. This book isn't about the old war, but it explains how people feel about my main character and what he is.

This is me writing. This is me finally doing it. And the picture at the top of this post is how I feel about it.
Posted by Unknown at 11:15 AM

Yes, this is happening to me too with NaNo. I love how some times the characters just seem to take over and open up new plot lines that I hadn't considered before.