Yes, I'm afraid to admit that it has been quite some time since my last post. Of course, things have been quite hectic around here, but I will try to do better.

Since recently switching jobs and moving to the Civil Service, I have finally seen the realization a long-time professional goal. More-so, I have set upon a path that will leave me at peace as to the surety of retirement and the stability of continual employment until the day I'm ready to make that transition. After five and a half years as a contractor, you have no idea how relieving that is. But, as with all things, transitions of this type come with certain stresses. There is the stress of acclimating to the new environment and work processes, getting to know the new personalities and the dynamics of a new team and its corresponding workload. As easy going as I may seem to most, it might be surprising to find that I actually take these things very seriously.

The biggest change, however, is the addition of the newest member of our family, Mr. Devlin Augustus Frost. This little guy, like all our children, is completely amazing. He was born on July 8th at 5:47 pm, weighed 7lbs 10oz, and measured in at a respectable height of 20 inches. 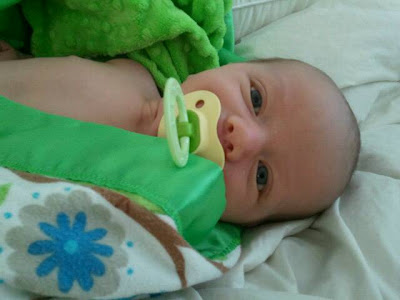 The hours after his birth were significant in the near complete absence of crying. Instead, he found more contentment in looking about the room, even lifting his head slightly to get a better view at the things in which he found interest, or to see who was talking. Even now, three weeks later, he has continued to surprise us -- having already demonstrated a knack for rolling over from his belly to back during his tummy time. He's been doing it since 2.5 weeks rather regularly, though it does tucker the little guy out to quite a fair degree.

I've also been making it a point to get a bit more reading in, and have been enjoying the hour I get three times a week from work to hit the gym. I do a bit of work on my midsection or arms and then hit the bike, where I've joined the league of the elusive Scarlet Pimpernel on my trusty Kindle. I must make it a point to mention that once I was able to get past some of the period terminology, the writing is quite picturesque and the tale enchanting in a way I didn't imagine possible. Count me as pleasantly surprised.

I've also run into a bit of a dilemma deciding how to pursue the continuation of my Masters degree as of late. Now that I'm in 'the system' the subject of my degree becomes less important. This opens the possibilities of going for an MFA, which interests me beyond explanation, but which one? I looked into Goddard's MFA in Creative Writing, but their response didn't answer my questions regarding applicability of the 9/11 GI Bill and the admission dates in the email I received were still for 2009. Not impressive, folks. And so, the search continues...

This post was written with the Blogger-droid app on my new cell phone. It would appear that Mr. Brady Frost has finally agreed to step into the 21st century. :)

Published with Blogger-droid v1.4.9
Posted by Unknown at 2:47 PM

Nice to see you’re still with us, Brady, and congrats on the new baby. My baby turned thirty a couple of weeks ago. I dedicated my latest book, a collection of poems, to her. Maybe that’s something you could pencil in for 2040. My daughter also works in the civil service but wants to leave. She’s stuck it out for a good few years but there’s not the future there there once was. The recession has seen to that. I was in the civil service myself during the last one and it took me years longer than it should have to get promoted. She’s finding the same which is why she’s been taking an Open University degree in the hope of improving her job prospects. The OU has been on the go for many years in the UK and degrees from it are actually worth something but even there unless she gets a first I’m not sure how much good it’ll do her; the competition is fierce.

The Kindle is now on sale over here but I’m not rushing to get one. That said I’m planning to bring out eBook versions of my novels once I’ve finished promoting my current book. I’m sure it works just fine but I’ve always found it’s best to wait a few years before getting into a new thing – I’m one of those who bought a Betamax back in the day rather than VHS thinking because the quality was better it would become the standard.

A MFA in Creative Writing sounds cool. I kinda regret not going to uni when I could. I don’t have the patience now and couldn’t care less if I have letters after my name or not. I know things on your side of the pond are a bit different and that kind of thing matters if you want to be taken seriously. So I wish you well.

Congratulations. It looks like your life is really on a high. I've been enjoying your blog ever since I stumbled across it the other day. I think we both have similar goals!