A Taste of Steampunk 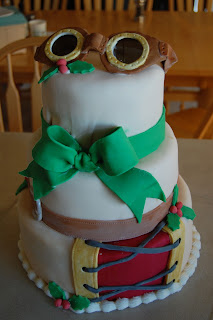 My wife, Tara, loves many things Steampunk. She also loves to decorate cakes. The latter is more of an angry pleasure, but when she gets something she likes it's definitely worth all the trouble. Of course, the fruits of her labors make me a bit wider around the middle, but I don't complain too much. The cake in the picture above was one of her latest creations and everything on that cake was edible. Yes, even the goggles! . She's recently started pursuing a more gluten-free diet, so there have been a couple of challenges in getting great tasting, good looking cakes but she's made some amazing progress modifying recipes.

I actually find the Steampunk genre very appealing, though I haven't had much time to read many stories. The ones I have had a chance to read were quite disappointing, but I wholeheartedly believe that I have yet to even scratch the surface of what's available out there. As a matter of fact, just yesterday I found http://www.steampunkmagazine.com - I haven't had much of a chance to read the PDF I downloaded, but what I have read seems very promising.

In general, I like the style of Steampunk and the atmosphere that era of technology implies. I guess it might sound weird, being as my way of life is so entrenched in computers and technology, but then again I suppose it's a psychological eventuality. We have to go somewhere to escape everyday life. If mine is full of capacitor-based thought, a steam-powered daydream might just fit the bill.

I used to tinker a lot as a kid. Not with steam, now mind you, but I did take apart every electronic gizmo I could get my hands on. My parents were actually pretty good about it, really. Especially since I didn't get in much trouble when I decided to wire up one of my "inventions" and plugged it into a wall socket that tripped every breaker in the basement. Okay, maybe they were good about it because I didn't tell them it was me... either way, fond memories. It's strange, though.. When I think Steampunk, I automatically think of my late grandpa Clark. I'm really not sure why. He drove a Subaru. He sometimes made me cry because I was a little too sensitive for his jokes. I never saw him draw, but I do recall him showing me a few of his old drawings, which I remember to be quite extraordinary. When asked where he was going he'd usually say, "To the moon, if I don't change my ways." Maybe that was it. Perhaps it was his quirky attitude, a part of him that I liked so much. Either way, Steampunk reminds me of him. Actually, now that I think of it, he did mention living in a little town called Coalville. Could that be part of it as well?

What would it take for me to sit down and write a Steampunk story? I think a big part of it is terminology and knowing what did and did not exist in that time period. Yes, there are cogs and wheels and all of the engineering pieces that go into building steam technology, such as boilers and pressure valves, but there is quite a bit more to it than that. For example, Steampunk generally implies a very Victorian era style. The clothes, the art, the things that might or might not appear in that setting all have to mesh. There are also accepted variants. Does your Steampunk environment exist in a previous point in time, or is it in an alternate dimension, or after the eve of the age of computers? Did we have to start over after some terrible world war? The way you answer these questions will set the grounds for what is and is not acceptable to include in your story. I imagine many era writers face the same problems; style of clothing being a primary concern, followed by the plague of anachronisms -- things that exist before their actual existence.

Either way, if you know of a couple choice Steampunk pieces, please feel free to comment and let me know. I've already got one book on my list, Boneshaker (Sci Fi Essential Books)

and then the sequel, Dreadnought

. Don't tell my wife, but I picked her up a copy of The Steampunk Bible: An Illustrated Guide to the World of Imaginary Airships, Corsets and Goggles, Mad Scientists, and Strange Literature

-- it should get here tomorrow. Maybe if I'm lucky she'll let me sneak a peek. :) Anyway, I've spent way too much money on Amazon lately, I could use a breather.
Posted by Unknown at 4:46 PM

I like the idea of steampunk but I’ve not read any. I liked the concept of The League of Extraordinary Gentlemen and Wild Wild West even if their execution wasn’t all it could be. You might find this site of interest especially the links in the right hand column.

Jim, thanks for the link! This looks very promising, I really appreciate it!

I've heard that some people consider Jules Verne to be one of the fathers of Steampunk with his epic adventures and the science of his day. I can see it. Especially with the last scene in Back to the Future III when Doc introduces Marty to his boys Jules and Verne after arriving from some unknown time in his steam-powered locomotive of time travel goodness. This makes me want to read even more of Vernes novels. I've only managed to find time for Around the World in 80 Days so far.

Of course, all of Vernes' writings were long before the term Steampunk would be coined. As it was, Vernes seemed to love science so Captain Nemo chose to power his awe inspiring Nautilus with electricity.

Steampunk is new to me. I look forward to reading into the genre a little more. Your wife's cake is beautiful. Thanks for introducing me to a new genre.

Tara is my new hero! That is by far THE coolest cake I've EVER seen! I will be blogging about it in the future I love it so much!!! I'm so fascinated by all things Steampunk. Just looking at them just makes my mind start reeling. I hope you do write a Steampunk story, I'd like to read that!