The Viability of a Seed -- A Short Story by Brady Frost

For those of you out there who've been following my blog for a while, you'll know that I started writing a short story entitled The Viability of a Seed about two years ago. This was a very hard story for me to write. If you enjoyed my previous short story, The Boy in the Window, I really do believe that you'll love this one. If you're only into action writing, this might not be your bag.

A lot goes into writing a story, even a short one such as this. While short stories don't have the market value of novels, it might be said that they can be harder to write. When you're sitting around 3-4k words, you really have to examine the value of the words you choose. Each one has to count for something. This is a lesson I've been trying to learn over the past few years. I hope I've grown as writer and that this story will prove to be both enjoyable and thought-provoking. I'd enjoy your input, even if you simply respond with an "I read it." When we think about situations like this, it might be easy to assume that a writer is somehow more than human, and doesn't really need your support. Though I highly doubt it, this might be true of bestselling authors -- but we little guys need to know we're being heard. We don't have sales to fuel us on. We don't have publishers putting up deadlines, clear evidence that there is some kind of demand for our work. We tell stories because it's in our blood. We can't really ignore it, but knowing that someone out there took the time to read what we've written is so important when it comes to the decision of whether to put ourselves out there to the masses in the future.

As for now, while I know that posting my stories to my blog would help a bit with exposure, I'm looking for more dedicated and supportive readers who will be willing to go just a bit further to read what I've written. Instead of posting the story up in plain text, I will provide a free link to my public Dropbox where you can download the PDF and read it at your convenience. If you download it to an electronic device, you will not need internet access in order to read it. I might change my mind and post it up here at some point in the future, but I'm still considering the option of putting together a collection of short stories to self-publish on the e-reader platforms.

If you read my previous post, you'll know how excited I am about the new Kindle Fire and what it means to the struggle to get books and short stories into the hands of readers in this new era. Some may argue that we lose a lot by moving away from traditional publishing houses and print media, but there comes a time when you have to embrace the new way of things and be willing to try to influence the outcome rather than fight the losing battle.

I honestly believe that in a matter of years we'll not only see a larger market share of e-publications, but we'll start to see people rolling their stories into interactive tablet and phone apps. With the new Kindle and Nook tablet e-reader platforms that have just been announced for the holiday season, we're moving away from simple e-readers. The world is definitely changing.

Touching back on supporting non-established writers, I'll offer you this. I put this link up on Facebook and Google+ a couple of days ago. So far, I only have 5 confirmed reads. As far as I know, none of my siblings have taken the time to read it. My mom hasn't read it. If comments on this blog are any indication, my family doesn't take the time to read what I post here. Perhaps they do. It could be that they choose to lurk, reading but not posting comments. My Google Analytics would argue against it, but I will admit that I could be wrong. The point is, unless you take the time to comment, there's really no way of knowing that you're cheering on the sidelines. 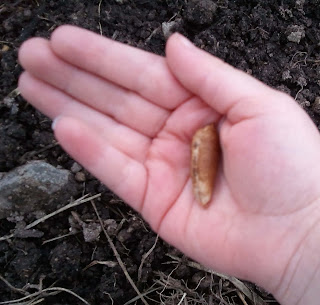 The Viability of a Seed is now currently available on Amazon Kindle and Kobo.
Posted by Unknown at 3:52 PM

Your work is filled with so much heart, truly a pleasure and a privilege to read. I'm so happy you shared your story on your blog, even if they lurk, and don't post comments you will reach people. Those who are ready for the message will find it and someone will share their experience with you as well. I kept an old diaryland.com journal for years and randomly I got the sweetest message from someone who said how much they appreciated it and how they could relate and how it was just what she needed to hear. It will reach people. Out of the comments I received over the years and the comments I wished to receive and didn't I will never forget that I reached her. Just reaching one person is tremendous and I know from your Facebook you've reached two of already! Don't give up or get discouraged and no matter what create!!! Share, express. You have a gift my friend!!! With much love- Kadee

Thank you so much for your kind words, Kadee. I don't want to come across with a poor-picked-on-me attitude in any way. The feeling that I'm not making a difference has definitely hindered my writing and my desire to keep my blogs up to date as much as I used to.

I am so glad that you enjoyed what I had to share. I felt like I put a lot on the line with this story, and even more with the blog post at bradymakesit.blogspot.com.

I know there is a lot of value in writing for yourself, but the truth is that I've always written for others. I'm not as selfish as I used to be, and I don't do it for attention like I used to. Still, there is a lot I have to learn in the way of choosing my readers and writing for the ones who will be here, for the ones who will not be "too busy" to read what I've written.

Life is a journey and I intend to keep learning and growing. I suppose this is just one more step in the right direction.

Thank you, again, for taking the time to let me know about your feelings and experiences. It is much appreciated!

I enjoyed this story, it was very touching. This story took me on a lovely journey for a few minutes. Thanks

You're very welcome Brady. I don't get that you come across with that kind of attitude in the slightest! I do know what you mean though. It's hard to remain motivated if you feel it's not making a difference, but it does and it will make a difference and best of all it will help you in the process!

I have come to find that I am in a better mood on days I write than on days I don't, I need to do it for me as much as I feel the need to do it to reach out and share with others as well. I don't think there is anything wrong with writing for other people, I would guess all writer's do it in one way or another honestly! I mean I have my writing that's just for me, but why blog publicly if not to do it for others. I don't see that as a bad thing at all. :)

I cannot open the PDF, Brady. E-mail me a copy, will you?

Hey I stumbled across your blog while searching for some creative writing blogs. I read your story and thought it was great! Thanks for the good read.

Thank you for your comment, Lori! I'm glad you liked the story. We're going to have to do a movie night when I get through all this Cyber Law homework.. :)

I sent it off, Jim. Let me know if you still have trouble. I'll send you a Word doc instead. :)

ifans, thank you for stopping by and reading my story. I really appreciate that you took the time to comment and I hope you find value in what I have here in my archives!

And it was great. I will admit to not reading your first story, which I will remedy if you post a link or shoot an email with it. And you can thank Emily for mentioning your story about 3-4 times in the last week.

Great dialog. I think that has to be the hardest part. Getting the words just right so the characters do not sound too fake or cheesy, but having just a cheese to make it sound real.

The underlying theme to your story is one I have in my heart and head day in and day out, as I am sure you do as well with your crew.

Thank you for sharing and very impressive writing!

I enjoyed reading your story. Felt like it came from the heart. It sure reached me. So keep writing. Thank you for sharing.

@Tyler - Thank you for taking the time to read this and for letting me know.

I've been super busy with work and school lately and after finishing this story and putting it out there I suddenly feel a lot more insecure about The Boy in the Window. I guess I need to read through it when I finish this last assignment for my Cyber Law class and make sure I have everything fixed up. I also need to embed the copyright and disclaimer for it being fiction and not related to any real people. That's something I put into the file properties this time. Doesn't take much extra effort, but this class was supposed to be finished tonight. I'm a couple of days behind.

@Otto Thank you for letting me know that this story meant something to you. I really tried to put a lot of myself into it and sometimes the biggest danger is letting yourself get in the way of the story. I'm so glad to hear that I didn't mess it up as bad as it sometimes felt. :)

@All your comments really do matter to me and you've all got me wanting to write more. I aspire to learn from this process and to make my next story even better.